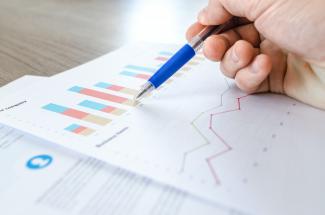 Enthusiasm for US stocks continued into the second quarter with the S&P 500 gaining 8.5% overall. Growth companies reasserted their preference over value with the iShares S&P 500 Growth ETF (IVW) up 11.7%, compared to the iShares S&P 500 Value ETF (IVE) which gained 4.5% during the second quarter. Small company US stocks also rose in the quarter by 4.3%, but trailed the large company stocks. Late in the quarter the equity markets sold-off as inflation indicators were well above expectations, but the decline was short-lived and US equity markets closed at or near record highs. International stocks trailed the U.S. but also gained on the reopening optimism with the MSCI Developed Market Index and the MSCI Emerging Markets Index up 5.4% and 4.4%, respectively.

The bond market and longer-dated interest rates were unfazed by the higher recent inflation numbers, as the US Federal Reserve has signaled that they believe that current levels of inflation are “transitory”, and price increases were predictable with the re-opening of the US economy but will not continue at this rate. The annual yield on the ten-year US Treasury Bond declined from 1.74% on 3/31/21 to 1.45% at the end of June. In response to the lower yields, the Bloomberg Barclays Aggregate Bond Index turned in a respectable 1.8% gain during the quarter.

Another contributing factor to rising inflation everywhere is that supply chains were not in sync or prepared for the overwhelming consumer demand. Consumer spending came back like a switch of a light, as mass vaccinations signaled a return to normal. According to an analysis by BMO Capital Markets, US households saved an extra $1.7 trillion from February 2020 to January 2021 (“The Balance” 3/1/21). The result of this extra savings, combined with an increase in “pent up demand”, created a spending spree on everything including housing, autos, travel, restaurants, and apparel to name only a few. For more info and a visual on US inflation over the years see the SFM Quarterly Chart in 2 pages.

Unemployment remains stubbornly high, which is why the US Federal Reserve plans to be more tolerant of higher inflation in the short-term. Many market observers think that the generous unemployment benefits have led to people deciding to take the summer off, and will re-enter the job market in the Fall. According to the U.S. Bureau of Labor Statistics there are currently 1.2 persons unemployed for every 1 job opening (March 2021). This compares to a ratio of 6.5 at the end of the great recession of ‘08/’09. In other words, employers are having a difficult time finding workers, which has historically presaged higher wage inflation. Increasing wages tends to be more of a threat to “unexpected inflation” than the more “transitory” price increases caused by higher consumer spending, as higher wages become permanently embedded in a company’s cost structure.

At SFM, our thoughts are that inflation will be a bigger problem than the Fed believes, but is not likely to be as severe as the late 1970’s and the early 1980’s. (See the chart in 2 pages) Accordingly, as previously mentioned, we have made investments in your Account that tend to do well during inflationary periods such as real estate, gold, silver, and more recently copper. We have been concerned about the ability for the bond portion of your portfolio to match historical returns if interest rates rise as expected, and have positioned more of your investment portfolio towards alternatives like the aforementioned positions as well as fixed income instruments that are much less impacted by rising interest rates. Private credit or direct middle market corporate lenders like Blackstone and Cliffwater actually benefit from rising interest rates and inflation as loans are shorter in nature and the rates they charge float, which means they receive higher interest payments as interest rates rise. The current yield on these holdings are between 7%-8%, compared to a level of only around 1.5% on the Ten Year US Treasury. Importantly, nearly all of the loans issued are secured by the company’s assets and are senior to their other loans (1st to be paid back), which provides sufficient collateral to offset a significant portion of any losses in the event of a default.

As the economic recovery continues, the global stock market appreciation has also continued in the second quarter. Some stocks that most SFM clients own that had especially strong returns which outperformed the broad index in the quarter included the online advertising giant Alphabet +23.2% (best known as Google and also owns YouTube), the asset management company Blackstone +31.6% (which also manages some alternative investments that we own), and the two industry-leading business software companies Adobe +23.2% and Salesforce.com +15.3%. Other U.S. companies that also produced very strong gains in the second quarter (and 2021 year-to-date) include the medical technology firm Danaher +19.2%, the social media/online advertising company Facebook +18.1% (which also owns Instagram), the online payments firm PayPal +20.0%, and the business software and cloud computing service provider Microsoft +15.1%. In addition, despite foreign and emerging market stocks generally lagging the U.S. stock market in the quarter and year-to-date, the following holdings outperformed: the technology conglomerate Sea Limited +23.0% (the largest e-commerce company in Southeast Asia), the world’s largest liquor company Diageo +16.7%, and the Swiss food and beverage company Nestle +14.1%, which owns more than 2,000 brands in 186 countries including dominant positions in coffee and pet food. However, some stock positions trailed the overall market in the quarter after very strong previous returns such as Southwest Airlines -13.1%, Fiserv -10.2% (software for banking industry), and Zillow -6.7%. Some foreign stocks that lagged their index included Alibaba +0.0% and Tencent -5.4%, which are both dominant Chinese technology conglomerates that underperformed due to increased government regulation.

Meanwhile, due to our long-term positioning in attractive above-average income positions with below-average interest rate risk, your total bond portfolio continued to earn attractive returns, beating the US Bloomberg Barclays Aggregate Bond Index in the quarter and very strongly outperforming in 2021 year-to-date. Finally, in the alternative investment category gold and silver rebounded and earned solid profits of +3.7% and +6.7% respectively. The Blackstone Real Estate Fund +6.7% continued its strong appreciation along with its consistent monthly income payouts, and the Income Structured Products all earned attractive returns.

Markets have rewarded patience during the pandemic, with some moments of anxiety due to the unprecedented shut down and subsequent re-opening of the US economy. Our belief is that the economy as well as many companies are no longer in survival mode, and should have the wind at their backs for the foreseeable future. There will most certainly be more challenges in the global fight against covid, but at this point we believe the worst should be behind us. We thank you for putting your trust in us and always welcome your feedback.