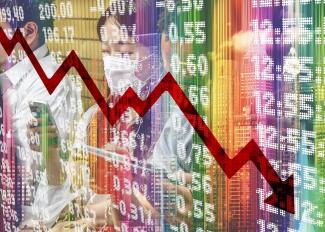 Coronavirus and the Stock Market Impact

We wanted to give an update on our thoughts in light of the stock market correction experienced over the last 2 weeks, which has led to the S&P 500 Index (which represents the U.S. stock market) to decline by -10.9% from the all-time high on Feb. 19th and by -6.3% in 2020 Year-To-Date. As far as corrections go, defined as a decline of -10% or more, this has been one of the fastest on record. But it is not all that surprising considering the length of time since the last correction in December 2018. These corrections are part of normal stock market trading and should be expected; as declines of -10% or more have taken place in 53% of all years since 1950. And in more than 91% of all the years we have experienced a decline of -5% or more. At SFM we have diversified your investments into bonds and alternative investments, which have held up well during this sell-off, and have positioned your total portfolio to ride out this exact type of volatility.

According to Yardeni research we have had 11 corrections since 1998, one every two years on average, as shown in the chart below.  Only two of these corrections, the “Dotcom Bust in 2000” and the “Great Financial Crisis in 2008”, turned into full-blown and devastating “bear markets” (stock market declines over 20% from the highs). Every other previous “correction” resulted in new highs within six months. And even with both of the “bear markets” in 2000 and 2008, investors with a diversified portfolio that includes bonds and alternative investments typically saw new highs for their account values within a few years. Our time horizon for the stock portion of your portfolio is much longer than these examples.

One way to look at stocks over the next 10 years is to compare them to the leading investment substitute, a 10-year U.S. government bond. As of this writing, if you buy and hold a 10-year U.S. Treasury Bond you will earn a return of 1.0% per year over the next 10 years (not a typo, only 1% per year)!  Meanwhile, not including any potential appreciation in the stock market, the S&P 500 Index is positioned to pay annual income of more than double this or 2.0% per year. So, if you have a long time horizon and were not allowed to sell either for ten years, which would you rather own?

Despite the recent decline, the stock market has actually been functioning properly during the past two weeks. There were no stops to trading caused by the “circuit breakers” and people that wanted to buy or sell got their orders executed. This is important during times of stress in the market. Although we had a strong rebound in the stock market on Monday 3/2/20, stocks are back down again on Tuesday 3/3/20 despite an emergency 0.5% reduction in interest rates by the U.S. Federal Reserve today. We are not out of hot water yet and we urge you not to overreact to this recent volatility, which as we have shown in the chart above is par for the course when investing in the stock market.

Speaking to the main cause of the downturn, the “Coronavirus”, we recognize that the second largest economy in the world (China) went into shut-down mode for much of this first quarter. And the virus has now spread outside of China. This has caused a major adjustment to 2020 profit expectations for U.S. companies, with Goldman Sachs calling for zero growth in corporate profits this year, and even this could be optimistic. Global supply chains have been seriously disrupted, and the major questions remaining are how much worse the outbreak gets around the world and how long before things can return to some sense of normalcy.

There is still plenty of fear about the mortality rate and contagion of the virus, but to put things in perspective, China has experienced (or at least reported) between 2,000-3,000 deaths so far in a country with a population of over four times the United States. According to the Center Disease Control and Prevention (CDC), the U.S. has experienced between 12,000 and 61,000 deaths annually since 2010 from the normal flu and flu-related illnesses. We are not trying to discount the risk of a massive “pandemic” but would argue this is an annual event with a more virulent and fearful strain dominating the news cycle.

We have received and responded to some of your concerns and want to affirm our strategy in creating long-term gains for your investment needs. The initial fear that you may feel when looking at your account values should be tempered by the fact that corrections and bear markets are a frequent occurrence and not something to be feared. Your portfolios are positioned with a risk profile suited to your specific needs and time horizon.

It is important to keep this sell-off in perspective, and not to make impulsive or knee-jerk investment decisions based on fear. Just like everyone else, we do not know how things will turn out in the short-term, and things are likely to get worse before they recover. We would like to assure you that we are monitoring things on your behalf and will make appropriate changes to your portfolio as we view necessary. Please do not hesitate to contact us if you have any questions or concerns.

Like all other market events we have experienced over the past 25 years, “this too shall pass” and the markets will return to trading on fundamentals. Currently, we are dealing with something new (the Coronavirus) and speculation about how terrible it could be is running rampant. Eventually, calmer people and actions will prevail.