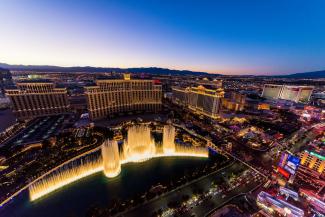 The Dow closed the month of October at 27,046 for a monthly gain of 130 points or 0.5%.  The market dropped coming into the month but recovered the lost ground and managed to end with a small gain.  2019 is on track to be a very good year with both the stock and bond market posting above-average gains.  The political climate and the presidential race is starting to heat up and is likely to cause some volatility as we end 2019 and enter 2020.

•    The Saudi Arabian Oil Company (also known as Aramco) is planning on paying an annual dividend of $75 billion when it eventually goes public.  That is a tremendous annual cash distribution relative to what a typical U.S. company would payout.  It is estimated that the total value of Aramco is $1.5 - $2 trillion dollars.  Possibly the most valuable company in the world.

•    GE has one of the largest pension plans in the United States.  There are currently paying 600,000 retirees, workers and beneficiaries receiving distributions.  The company is freezing the benefits for 20,000 existing workers and is initiating a phase-out of the guaranteed pension for non-union workers at the company.  The GE pension plan is underfunded by $27 billion dollars and is one of the several giant liabilities the company has to deal with as the new CEO tries to find a path forward.

•    GM concluded negotiations to end a strike that proved to be very costly.  The UAW and the company were at odds over a variety of issues that were important to both sides but after workers were on strike for over a month, the two sides found common ground and reached a deal.  GM needs to close plants and invest in electrification and the UAW wanted higher pay and more job security.

•    Proctor and Gamble reported strong results as sales of its premium consumer products increased across the board.  Gillette, Pampers, Tide, and Crest all contributed to the good quarter.  Beauty products focused on skincare were also strong performers.

•    PG&E (Pacific Gas & Electric) said it could take TEN years to upgrade its electric transmission system to the point where they would not need to shut down customers in California to reduce the risk of wildfire.  That would mean annual blackouts for the next ten years for thousands of residents.  This aggravation is in addition to the risk that your house burns down.  East coast living is looking good.