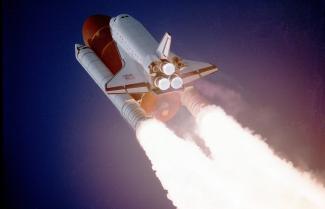 The Dow closed the month of July at 26,864 for a monthly return of 264 points or 1.0%.  The major tech companies have been in the news this month as various government agencies are investigating their business practices and looking into privacy concerns and how consumer data is being used and sold.  At the end of the month, the Federal Reserve announced a quarter point rate cut.  The trade dispute with China is growing and becoming more of a risk to the long economic expansion we have enjoyed over the past 10 years.

•   Virgin Galactic is likely to become the first publicly traded human spaceflight company.  Richard Branson’s company has raised $800 million from investors and expects to be putting passengers into space within the next few years.  600 people have put down deposits totaling $80 million to be the first people to experience space travel.

•   China’s automobile market is slowing and causing problems for American auto manufacturers doing business there.  The trade tariffs are hurting the Chinese economy and reducing demand and consumer confidence.  Auto sales are down -12% in China and are at the lowest level in the past four years.  Ford, General Motors and Fiat Chrysler all do business in China.

•   Amazon has entered an arrangement with Lady Gaga to help launch her new beauty collection of products.  The new products were introduced on Amazon Prime Day and are only available on Amazon and Lady Gaga’s company website.  The name of her company is Haus Laboratories.  Many luxury cosmetic brands have avoided distributing on Amazon because they are concerned with losing control over their brand.

•   Boeing is setting aside $5 billion to compensate airlines that have been disrupted by the grounding of the 737 MAX planes.  In addition to the grounded planes owned by the various airlines, Boeing is not delivering the planes it is currently manufacturing and those are simply being parked until the FAA and other government agencies certify that the planes are safe for commercial use.  The latest reports indicate the planes may be grounded until 2020.

•   Home prices on the West Coast fell for the first time since 2012.  Sales have slowed in the Bay Area, LA and Seattle and buyers are holding back hoping the prices decline further.  During the past seven years, home prices have roughly doubled in the high demand cities.  Mortgage rates are very attractive right now and unemployment is very low which usually supports home sales.

•   The U.S. Treasury is on track to issue $1.2 trillion dollars in debt this year as the government continues to run large deficits despite a growing, strong economy.  The large tax cuts in 2017 coupled with an increased budget deal has put us in this position.  If we are running $1 trillion plus deficits when the economy is good, what is going to happen when we are in a recession and tax revenues really fall?  Unfortunately, this topic is not part of the current political debate and does not get much coverage in the media.