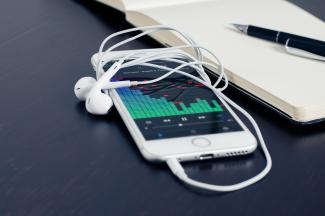 The Dow closed the month of April at 26,592 for a monthly return of 663 points or 2.6%. The market continues to exhibit strength in 2019 with brief sell offs being followed by persistent rallies. GDP in the first quarter registered a strong 3.2% despite the trade tariffs and the partial government shut down. The American consumer remains strong with rising incomes supporting good spending levels and confidence.

•   Verizon launched 5G cell service last month in Chicago and Minneapolis. The new service is up to 100 times faster than 4G (what we use now) and will allow for 8 way video calls, driverless cars, sports streaming at a better resolution than an IMAX theater and other future uses.

•   Apple and Spotify are battling for the number 1 spot in streaming music subscriptions in the U.S. Apple is currently in the lead with 28 million subscribers with Spotify a close second at 26 million. On a global basis, Spotify (a Swedish company) has a dominant lead with 100 million users.

•   Oil prices are surging as the Trump administration limits permits to other countries to import oil from Iran. Gas prices are rising as the government is attempting to restrain Iran’s activities in the Middle East that run counter to U.S. interests.

•   Consumers appetite for a good movie was on display last month as “Avengers Endgame” hit the big screen. The movie became the first to break $1 billion in its first five days. Some theaters were running the movie 24 hours with 2 am shows selling out.  Marvel’s superheroes have been building a worldwide audience.