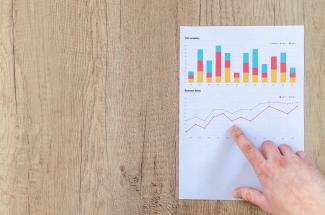 The fourth quarter of 2021 continued the bumpier ride that began a few months earlier, but the stock market ended on a high note and concluded a strong year, for the third year in a row. Despite the higher volatility, global stocks rose to a new all-time high at the end of December. In general, US stocks outperformed foreign stocks and large companies outperformed smaller companies. Not all investments joined along for the ride as Chinese and other emerging market stocks in addition to US Treasury and other government bonds were the only categories that produced weak results in 2021.

The stock market typically rises much more often than it falls. As a result, it pays to be optimistic and to expect better times in the future. For example, consider that the stock market has risen substantially in 2021 despite the fact that interest rates rose, inflation was much higher than we’ve gotten used to in the last 20 years, stock market multiples compressed (stocks got cheaper compared to their profits), growth stocks struggled, the world experienced serious supply chain nightmares, businesses faced strongly rising wages and a severe lack of workers, and of course the pandemic entered its second year. What drove the stock market to all-time highs at the close of 2021? As always, corporate profits are what is most important, and US corporations are estimated to have grown their profits by over 45% during 2021. This growth far outpaced the stock market appreciation and substantially exceeded the record profits in 2019 (prior to the 2020 profit decline). It is impossible to predict the direction of the market in the near-term, but over the long-term you are rewarded by buying and holding good businesses with strong competitive advantages, which is what we aim to do.

Interest rates finished the fourth quarter close to where they began the quarter, but higher than the start of 2021. In response to the movement in interest rates, the US Bond Index (Bloomberg Barclays Aggregate Bond Index) returned 0.0% during the fourth quarter and -1.5% during the entire year of 2021. However, the SFM investment team had expected this interest rate increase, along with a further rate increases in the future, and we have positioned your investments with higher inflation and rising interest rates in mind. This has allowed the bond portion of your account to earn a positive single-digit return, and very strongly outperform this US Bond Index benchmark return of -1.5% in 2021. This was led by the outperformance of some bond investments including the Rational Special Situations Income Fund +5.3%, the PIMCO Flexible Credit Income Fund +8.8%, the Thompson Bond Fund +5.7%, and the CION ARES Diversified Credit Fund, which returned around +5.0% prior to being sold during the year.

As a result of our expectation for higher inflation and rising interest rates, SFM has diversified your investments over the past couple of years into a much larger share of alternative investments. We continue to believe these alternative investments offer above-average investment returns along with less risk to rising interest rates than bond investments. And we expect these alternative investments to continue to outperform bonds as they have in 2021, while experiencing much less volatility and risk of decline than the stock market. This allocation change has been successful and has paid off in the form of lower volatility, as we expected, but also in strong profit returns. In the alternative investment category of your portfolio, the private lending investment investment Blackstone Secured Lending Fund  gained +47.7% in 2021. This fund completed its investment phase and then successfully launched a listing on the public exchange in late 2021, which caused the exceptional price appreciation. Another alternative investment that most of you own is the Cliffwater Corporate Lending Fund which returned +10.4% during the full year. This fund invests in high-income private company loans similar to the Blackstone Secured Lending Fund. Other alternative investments also experienced excellent returns in 2021 such as the private real estate investments: the Blackstone Real Estate Income Fund, up +29.4%, the Griffin Access Real Estate Fund, up +23.7%, and the Versus Capital Real Estate Fund up +18.8%. This strong real estate performance was due to the tailwind of higher inflation, rising demand for commercial real estate, along with rental income that is growing by double-digits on average.  The national housing shortage continues to create robust rental demand with some markets reporting bidding wars for apartments.

Stock selection continues to be a key focus for SFM with our belief in strong, competitively advantaged companies leading our choices. Individual stock performance leaders during the year included the alternative asset manager Blackstone +107.8% (which manages the Blackstone funds mentioned in the previous paragraph), the internet search company Alphabet (Google) +65.3%, the home improvement retailer Home Depot +59.5%, and the software and technology company Microsoft +52.5%. SFM clients also benefited during 2021 from owning the stock of the laboratory & medical equipment firms Danaher +48.6% and Thermo Fisher Scientific +45.0%, the paint company Sherwin-Williams +44.8%, the casino company MGM Resorts +42.5%, and the liquor company based in the UK Diageo +41.5%. Meanwhile, some investments lagged in 2021. These positions included the payments firms PayPal Holdings -19.5%, Fiserv -8.8% and the cyber security company Okta -11.8%. We still believe in these companies long term, but due in part to strong outperformance in the previous years, and new potential government payment solutions they struggled. Other laggards included, the internet real estate fir Zillow (sold earlier this year) -34% and the Chinese technology leaders Alibaba -43% and Tencent -18%. Both Alibaba and Tencent were trimmed earlier in the year on news that the Chinese government was changing its laws and hurting the growth potential of these companies.

The unemployment rate, a key driver in the U.S. economy, ended 2021 at 3.9%, according to the U.S. bureau of labor and statistics. This is the lowest rate it has been since before the pandemic. In addition, 4.5 million Americans quit their jobs in November alone, matching a record high. Meanwhile, nearly 11 million job openings are left unfilled in the US, which is also near a record high. Some have hypothesized that these employment issues may continue for a while with many Americans simply choosing early retirement over rejoining the labor force. Still, with a strong labor force and more competitive jobs available in 2022 Americans will have the income needed to drive our economy higher. With a new year ahead of us, there is always the potential for something out of left field to rock the markets, but we are hopeful for continued growth moving into the new year with some bumps along the way.

We hope you have a great 2022! We appreciate the trust you place in us, and we welcome your feedback.