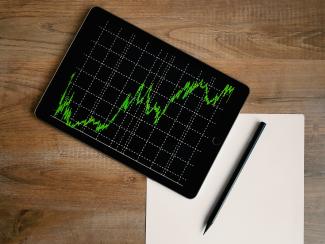 The first quarter of 2022 was one of transition. COVID-19 started to recede after the Omicron variant swept the country, transitioning the headlines to other topics such as the war in Ukraine as investors began to move past the virus. With cases declining, companies have begun preparing for hopefully a return to a more normal environment this spring. The first quarter also brought a transition in monetary policy as the US Federal Reserve announced plans to end quantitative easing or stimulating the economy in February, signaled that it will begin to raise interest rates substantially over the next year or two, and then followed through with the first of many increases to short-term interest rates with a rise of 0.25% in March. By raising rates, the Federal Reserve or the Fed hopes to lower the 7-8%/year rise in inflation that we are currently experiencing. This process requires a delicate balance of slowing the economy enough to effectively decrease inflation, while not slowing the economy too much so that we enter a recession. At the same time, global businesses are looking harder at moving production of goods closer to where they are consumed, which has the effect of beginning to reverse the globalization trends of the previous century.

Due to these issues, 2022 has had a tumultuous start to the year. The markets saw a sharp decline to start the year on fears of inflation and interest rate hikes and despite increased volatility, largely shrugged off the impact of the war in Ukraine. As the Fed started to raise interest rates in March, the markets began to rebound in the final few weeks of the quarter by regaining some of the initial losses. The US stock market declined in the quarter with the S&P 500 index returning -4.6%, the technology-heavy Nasdaq Composite index returning -9.1%, and the small company Russell 2000 index declining by -7.5%. International stock markets followed suit with the Developed Markets EAFE index down -5.8% and the Emerging Markets index dropping by -7.3%. Bonds were also down to start the year and did not provide the stability we expect with the U.S. Aggregate Bond index down -5.9% due to fears over how many future interest rate hikes are likely as the Fed continues to attempt to slow the rate of inflation.

When the stock market declines, most investors look to bond investments as a safety net to help support their overall portfolio values. However, with the Fed raising interest rates, which reduces the value of bonds, this has not provided the safety investors’ hoped for. At SFM we have anticipated the current rate sensitive environment, which is one of the reasons we have prioritized adding alternative investments to our portfolios over the last few years. These alternative investments which include private real estate, gold & silver, and private debt have increased the diversification in your investments, which helps to reduce the overall portfolio risk. In addition, this has generated attractive total returns and strong income along with lower volatility. Despite both the stock and bond markets declining to start the year, the alternative investment category of SFM portfolios performed very well. The strongest performing section within the alternative category was private real estate as all of our holdings earned solid gains in the quarter including the Blackstone Real Estate Income Trust +5.3, the Griffin Real Estate Fund +4.2, and the Versus Multi-Manager Real Estate Fund +3.9. Gold and silver  also generated strong performance as these precious metal prices rose by +5.8% and +6.4% respectively as they benefited from the global uncertainty surrounding the war in Ukraine. In addition, private debt performed well in the quarter led by the gain in the Cliffwater Corporate Lending Fund +1.8%. Meanwhile, the Versus Capital Real Assets Fund +3.2% also earned strong gains due to its investments in farmland, timberland, and infrastructure, which benefit from the higher inflation that we have recently experienced.

Even though the overall global stock market declined in the quarter, there were individual stock investments that bucked the trend and outperformed their benchmarks. A few stocks that outperformed in the first quarter included the Warren Buffett-led US conglomerate Berkshire Hathaway +18.0%, the credit card company Visa +2.5%, and the medical device producer Stryker +0.0%. Some other outperformers included the alternative investment manager Blackstone -0.8%, the consumer electronics firm Apple -1.5%, and the online retailer Amazon.com -2.2%. However, some stocks lagged the index during the quarter such as the payments company Paypal Holdings -38.7%, the social media firm Meta Platforms (formerly known as Facebook) -33.9%, the paint company Sherwin Williams -29.0%, and the retailer Home Depot -27.4%. The primary reason that these stocks trailed the index is that in the short-term when interest rates are rising as they were this quarter, the value of this category of fast-growing stocks tend to be most impacted.

Similar to stocks, bonds also experienced losses in the first quarter as inflation stayed high and the US Federal Reserve began to raise short-term interest rates and signaled more increases to come. Despite the loss on the total US bond market index of -5.9% in the quarter, nearly all bond positions in our client portfolios outperformed the bond index such as the Royal Bank of Canada Inflation-Protected Bond, which gained +1.2% in the quarter, the Rational Special Situations Income Fund -1.9%, and the Thompson Bond Fund -2.0%. At the same time, only one of your bond holdings actually trailed the bond index in the quarter, the PIMCO Flexible Credit Income Fund, which pays annual income of 8.6%/year and outperformed the index by +12.6% in 2021, but slightly trailed the same bond index by -0.1% in the first quarter.

It’s important to keep in mind that long-term investing is our goal. And the stock market rewards thinking and acting like a long-term investor, which reminds us of the quote from the successful investor Mohnish Pabrai: “You don't make money when you buy stocks, and you don't make money when you sell stocks. You make money by waiting.” Over the long-term, the markets reward better businesses with stronger competitive advantages who distance themselves from the pack and their stock prices outperform. However the same competitive advantages won’t necessarily help their stock price over the next few months. What matters over the very short-term are things like headlines, news flow, market perception, investor sentiment or confidence, and other current events. This is why it’s important to view the headlines online, on TV, or in the newspapers with a grain of salt and not let it influence your investment strategy and sell at the wrong time due to fear, as we discuss in the quarterly chart on the following page.

We appreciate the continued trust you place in us, and we welcome any thoughts or comments that you have.