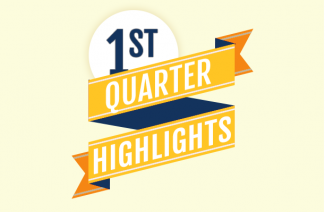 Optimism about vaccine roll-outs in the beginning of 2021 helped stock market gains in the first quarter, although returns were muted in March due to an increase in longer-dated bond interest rates. During the quarter, the annual yield or income on a Ten-Year US Treasury bond rose from 0.93% to 1.74% per year. This increase in rates reflects both the belief that the economy will show substantial strength in 2021 as we return towards more normal activities, and also due to the massive $1.9 trillion economic stimulus package enacted by congress during the quarter. Additionally, there is a high likelihood of an Infrastructure Bill in the future.

When interest rates rise, the value of many bonds decline in value. As interest rates rose in the first quarter, the overall U.S. Bloomberg Barclays Aggregate Bond Index declined by -3.4%. The price of most bonds react quickly to the latest interest rates changes, with buyers and sellers adjusting their expectations to reflect the latest rate. Stocks/Equities are not as affected by increasing rates, as the initial rise is often associated with improving economic conditions (as it is this time), which should translate into higher corporate profits. A normal and healthy economic recovery starts, just as we are experiencing in 2021, with increasing rates for long-term bonds. Meanwhile, the rates on shorter-term bonds rise more slowly. This creates incentives for investors to take risks in order to capture higher returns by owning longer duration assets.

The US Federal Reserve is keeping monetary conditions “loose” in order to ensure the economy surges after the Covid induced downturn in 2020. They are willing to accept slightly higher levels of inflation in the short-term, but risk letting the “inflation genie” out of the bottle. Keep in mind, the Fed has more control over short-term interest rates, while investors (the buyers and sellers in the bond markets) will have greater influence over the rates of longer-dated bonds.

During the first quarter stocks turned in positive but mixed results as we saw a reversal in preference for smaller and mid-sized companies, which like this year typically perform well coming out of a recession. The thought is that increased demand helps not only the profitability of smaller companies, but the improving economy also reduces the need to raise cash or issue additional stock (diluting shareholders) and lowers the threat of bankruptcy risk. The fastest growing companies (iShares S&P 500 Growth +2.0%) took a breather during the first quarter after a spectacular 2020, causing a rotation into value related holdings (iShares S&P 500 Value +8.3%). Value stocks tend to be more cyclical or sensitive to changes in the overall economy, and thus commonly outperform when the economy begins to exit a recession. The overall large company US stock market or S&P 500 Index had a good quarter up +6.2%, while the smaller company Russell 2000 excelled by +12.7%. Foreign and emerging market stocks were also positive, with the MSCI EAFE Index up +3.6% and the MSCI Emerging Index adding +1.9%. In general, the prospects for growth companies have not diminished, but rising interest rates have caused a belief that the valuations need to be recalibrated to adjust for higher long-term interest rates. In theory, stocks are priced based on the future profits and dividends that a company is expected to return to shareholders. Pricing models use long-term interest rates to discount and put an appropriate value on these cash flows, so as interest rates rise, the models will calculate a lower determination for the estimated price of these stocks. Higher growth companies or more generally higher priced or more expensive stocks tend to be impacted more negatively by rising rates because more of their expected earnings will be realized further out in time.

And finally, we could not have a conversation about the quarter without mentioning the fact that the value of Bitcoin doubled during the quarter, and now represents over $1 trillion in market value. This may have come at the expense of gold and silver, which declined in the quarter. However, Bitcoin is nearly 10 times more volatile than stocks and gold. For example, in 2020 the price of Bitcoin crashed by over -62% in the span of just one month, and declined by over -84% in 2017/2018. Just as we all have faith in the currency of the US Dollar in order to make transactions, some speculators believe that Bitcoin offers a hedge against governments turning on the printing presses to create new money. Blockchain is the underlying technology that enables crypto-currencies like Bitcoin, and is a way to digitally track movements on an accounting ledger along with other benefits, while assuring that the accounts are correct and have not been altered. We believe that this blockchain technology used in crypto-currency markets will become more widely accepted, but until Bitcoin’s daily valuations become less volatile it is difficult to see it as a prudent investment or store of value, but rather a very speculative investment.

The stock market gains continued in the first quarter, with outperformance in some SFM stock holdings such as JP Morgan Chase +20.6%, Home Depot +15.5%, Southwest Airlines +31.0%, the casino company MGM Resorts +20.6%, and the investment manager Blackstone Group +16.6%. It was also a strong quarter for Alphabet (Google) +18% due to the strength of YouTube advertising, its cloud computing division, and the rebound in travel advertising. Due to the outperformance of smaller sized companies, some of your stock fund investments including the Vanguard Small-Cap Index +10.3% and the Vanguard Mid-Cap Index +7.4% earned strong returns. Meanwhile, due to their very strong 2020 performance and higher sensitivity to rising interest rates, some investments in faster growing companies lagged in the quarter such as the technology firms: Amazon.com -5.0%, Apple -7.8%, Okta -13.3%, ServiceNow -9.1%, and Autodesk -9.3%. For the same reason, some of your stock funds trailed the overall market such as Artisan Global Opportunities Fund -1.8%, the Artisan Int’l Small-Mid Cap Fund -1.4%, the Morgan Stanley Growth Fund -1.8%, and the Allianz Technology Fund -2.2%.

As we mentioned above, the first quarter was a tough quarter for the U.S. Bond Index due to the rise in interest rates. However, at SFM we expected and planned for this rise, and so your SFM bond portfolio was well-positioned with much lower interest rate risk than the Index. This led to the strong outperformance of your bond portfolio compared to the Bond Index, with considerable strength in the Thompson Bond Fund +3.3%, the CION Ares Diversified Credit Fund +1.8%, and the PIMCO Flexible Credit Income Fund +3.7%. The risk of rising interest rates and inflation among other factors also led us to increase your position in alternative investments over the last year, which helped your overall portfolio performance. These investments performed as expected, with the Blackstone Real Estate Income Fund +4.5%, the Blackstone/GSO Secured Lending Fund +3.9%, and the various Income Structured Products gaining between +1.4% and +3.6%.

There are many stories about wealth creation through speculation in the first quarter (GameStop stock, etc.) and also throughout history. When things are finally sorted out there will be more losses than gains in most of these new crowd-sourced phenomena. Our job as stewards of your assets is to find the best “investments” in businesses that will provide sustainable growth in sales and profits, which in turn should translate into higher valuations for your portfolios over long time horizons. Once again, we would like to thank you for the faith you put in our services, and welcome you to contact us if you have any questions or concerns.